My husband and I got married August 26th 2016. We are both photographers so I had the crazy idea to take our own wedding photos in various places with meaning to us. I sat and thought of all the different cool places we can take photos and I made a list. All the photos were shot on a tripod, most with a remote shutter Brian or I would use during the photo. A few I had a friend there to push the button after I set everything up how I wanted it.

We had met online in a northern lights group due to our love of the auroras. We chatted online for awhile and he asked me for tips on his family shoot he had coming up at Pottawatomie park in St Charles. I went to the park to shoot the sunset that night and he happened to still be there so I got to meet him in person finally. We met by the stairs that I didn’t know existed. I even went as far as telling him “There’s no stairs here!” We talked for a few hours and that’s where it all started. One of the first places I thought to do photos was the place we met. The stairs looked pretty cool and I have an obsession with Cinderella so I thought it would be cool to do Cinderella like photos on those stairs with my very own Prince Charming. 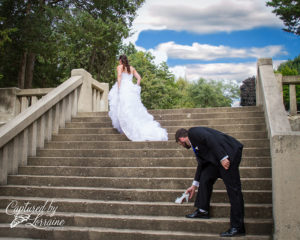 We’ve taken photos of ourselves under the Northern Lights before but now wanted photos of us in our wedding attire under the lights. One of the nights the auroras were supposed to come out we went north into Wisconsin with the dress and tux and we waited for the lights to show. While we waited we took some shots of us with the northern sky in the background. The lights never showed that night so I took the shots from that night and placed other northern lights shots we took before in the sky. 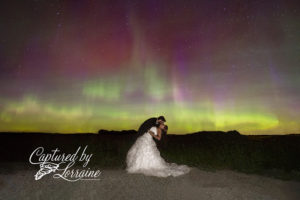 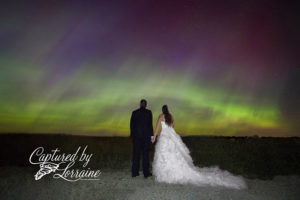 Brian proposed to me at the Lasalle Canyon waterfall in Starved Rock. We’ve taken many photos in that same canyon since it is one of our favorites so we have to do wedding photos there. We hiked to the canyon first thing in the morning, carrying our tux, dress, shoes and camera gear. We laid a big sheet down so I can put my dress on over my clothes and not get it too dirty. Our friend Josh came with to trigger the camera for us so I wouldn’t have to run back and forth in heels on wet ground. I set the camera and posed Brian so I can compose the shot the way I wanted. 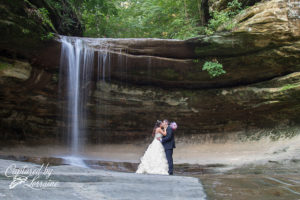 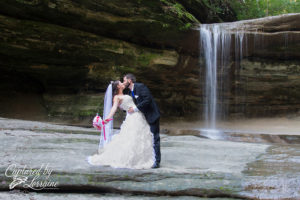 Both Brian and I love fireworks and would shoot them as often as we can. Of course I had to have our photos with fireworks. To get the shot we wanted we went down to Navy Pier in Chicago. Every Wednesday and Saturday in the summer they have a very short 10 minute display. We got there early, threw the dress and tux on over our clothes and set up the camera. We did some test shots to make sure we would be lit correctly when the fireworks started. We had to guess the locations the fireworks would go off to frame it correctly. Our friend Josh was there for these shots too so he could trigger the camera. I had to fix them up a bit in post process but I love them! 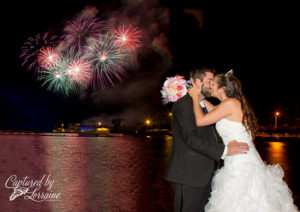 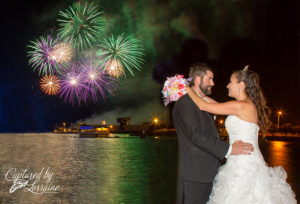 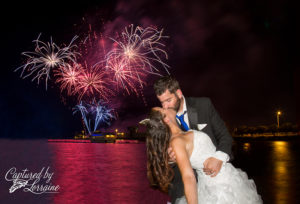 We spend a lot of time in the Fabyan Parkway Forest Preserve in Geneva. There are so many gorgeous places to do photographs there. We took some shots in front of the windmill to start off. There was a big hill in front of it that is used to sled in the winter so it was a little tricky. We set the tripod up and used the remote trigger. Next we moved to the pretty vine archway and gorgeous gate they have. These were also shot on a tripod and a remote. 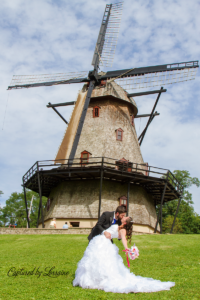 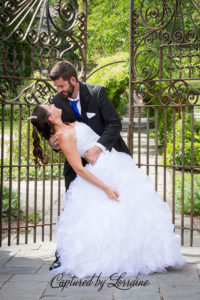 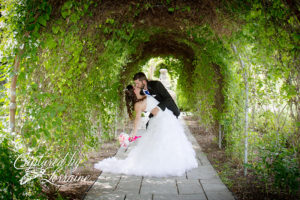 One of the last places we wanted photos was at LeRoy Oakes in St Charles Illinois. They have a few beautiful barns, trees and open prairie. This time we also included our Boston Terrier Chloe. We wanted to have some photos with her. We put the camera on a tripod and used the remote for the shots. She did a wonderful job during the process. 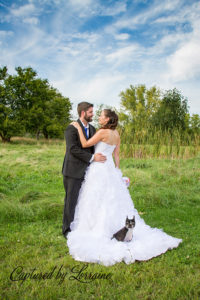 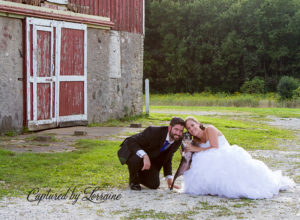 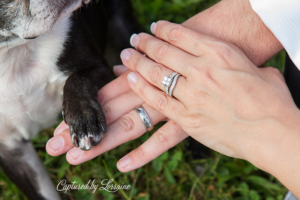 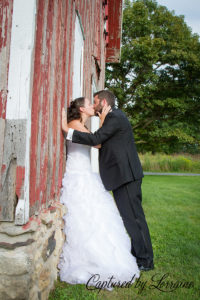 I had so much for putting on my dress a few different times and taking photos in all these fun places. I am available to photograph you and your wife or husband the same way I did my own shots. If there are places that have meaning and you want photos done there I can do them. If you want to include your furry friends I would be more than happy to photograph you all. Feel free to call or email me today to quote your photo shoot.